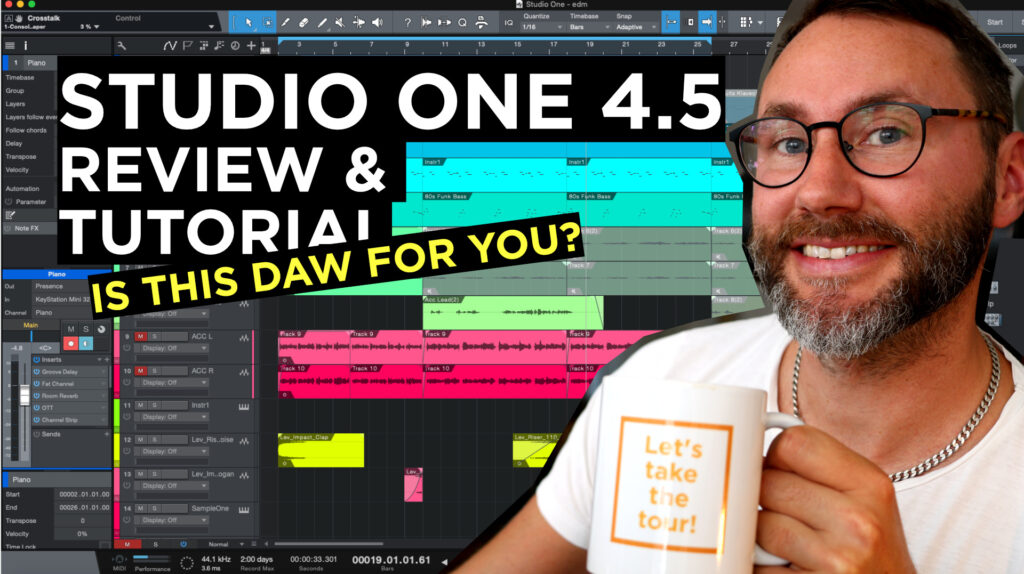 Studio One is a modern DAW that I’ve been using for film scoring and scoring several games the past years. Learn all about the great new features of Studio One 4.5 in this article and video!

This update features some really great improvements if you are using tons of plug-in instrument and effects. Studio One 4.5 reduces CPU usage with up to 70%! We also have new midi functionality in the piano roll. Generate random melodies from your midi content, and much more. Let’s look at this list of the most important new features:

New Features in Studio One 4.5 update

We find two distinct applications, or “views”, in Studio One. The Song- and Project-view. The modern design and colors of Studio One is appealing and it makes great use of the screen real estate.

The “Song” view is where you compose and produce your music. It features a modern DAW layout with a big arrangement / timeline centered on the screen with all your tracks and midi / audio clips.

You can open a more minimal track-list to the left. This gives you the ability to quickly observe more tracks and hide tracks from the arrangement view. Furthermore, to the right we have the browser for quick access to all your instruments, effects, loops and files.

It’s a familiar layout seen in many other DAWs so Studio One shouldn’t be hard to grasp if you have used Cubase, Logic, Reaper, Bitwig etc.

“Project” view is the dedicated mastering application in Studio one. In this view you make all your final mastering to the tracks. It’s east to import (update) tracks from your Song-view. With Project view you can compile red-book cd’s, DDP and also upload to soundcloud.

Grouping has been completely redesigned. Groups now have attributes for defining edit groups or mix groups using attributes for Volume, Pan, Mute/Solo, Inserts, and Sends. Groups can be nested and can be easily edited and activated/suspended with one click. A dedicated command can globally enable/disable all Groups at once.

If you have volume activated for the group, it’s still possible to adjust one track against the group, by just holding down ALT. This is a welcome addition to tailor exactly what functionaly you want the groups to respond to.

Studio One 4.5 features a brand new Plug-In Manager. The Plug-in manager lists all installed third-party plug-ins, including a list of plug-ins that were blacklisted during the initial scan, allowing them to be reset individually or globally. Showing or hiding individual or groups of plug-ins only takes a few clicks.

Setting up an external audio interface is a lot easier thanks to several I/O setup improvements. Add any number of new inputs and outputs in just one step, including custom naming and coloring.

Inputs and outputs can be reordered with simple drag-and-drop. Users who switch interfaces, move between studios, or collaborate will appreciate the new Import and Export options for I/O setups.

Splitting audio in the Studio One mixer

If you explore the mixer in Studio One 4 you find that there is a splitting button on the top left in the plugin window. This is where you setup the audio routing for your insert plug-ins. Firstly, it gives you a quick overview of the plugin flow. Secondly, you can add split-points and adjust “how” the split should be done.

How do you want to split the audio signal?

Branching out your audio is powerful if you want to do anything from parallell processing to more elaborate audio signal setups. In Studio One 4 mixer you can do the following audio splits:

In conclusion, splitting is very powerful.

If you are working on laptops you are gonna love this CPU optimization update in Studio One 4.5.

CPU load for using combined virtual instruments inside a Multi-Instrument has been reduced by 70% for Native Plug-ins. For third-party instruments you can expect around 50% CPU usage reduction. CPU optimization has also been implemented for SampleOne XT, Mai Tai, Presence XT, and Impact XT.

My studio is setup in a very light space and since the interface of Studio One is very dark, it can sometimes be a tad overwhelming in contrast. In the past (Studio One 2) the interface had a lighter grey tone which I preferred.

It would be great if Presonus gave us the ability to adjust the brightness / contrast of the interface. Bitwig Studio, has this user interface functionality integrated. If you want to read up on another modern DAW, you can check out this article and video I made on Bitwig Studio 3.

Studio One does not feature a clip launcher. So if you want to work with this type of composition and production style you should look elsewhere. Bitwig Studio, Ableton Live and FL Studio is great DAWs with clip launchers.

Ways to improve the insert chain?

The only downside I’ve found with the plugin insert functionality in Studio One is that we can “only” save the whole insert chain of a channel. It’s not possible to save part of the channel strip for later use.

In DAWs like Bitwig Studio it’s possible to save parts of your plugin chains, which makes it much more versatile and re-usable.

It’s nitpicking, but worth pointing out.

I think Studio One is great for media, game and film composing. The video support is great and being able to export audio directly to the video reduces the need for third party video apps.

Bands with regular rock instrument setups (read: drums and guitars) will also benefit from working in Studio One since we have such a great multi-tracking and multi-editing support. The track grouping is extremely useful and powerful when you want to make quick edits to several tracks.

In conclusion, I highly recommend Studio One 4.5 for anyone working with audio production and recording acoustic instruments. 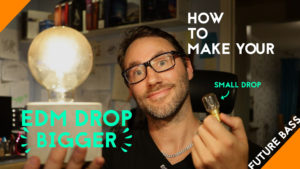 How to make your EDM Drop Bigger 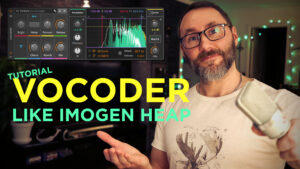 In this new video we explore the new Vocoder plugin in Bitwig Studio 3.1.1. The Vocoder effect can be used to harmonize your monophonic vocal 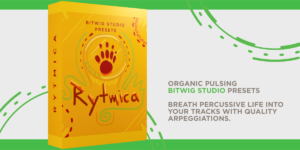 Welcome to Rytmica, a brand new Bitwig Studio preset pack. The pack comes with organic pulses and arpeggios oozing with grit and flavour. Rytmica is an excellent

Learn Bitwig with the Bitwig Studio 4 masterclass by Mattias Holmgren! Bitwig masterclass overview Do you want to learn how to master one of the 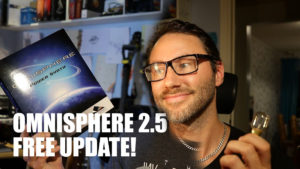 Omnisphere 2.5 first look video and article. I created a video to show some of the new exciting features of Omnisphere from Spectrasonics. This really 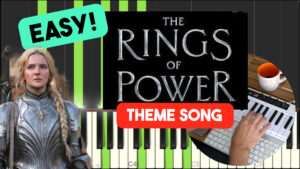 How to play The Rings Of Power theme song on piano

I made a video on how to play the Rings Of Power theme song so you can play it too! The opening theme to the